When you are trying to conceive, you may be on the lookout for any pregnancy symptoms. Most confused early symptoms of pregnancy with period symptoms include tender breasts, headache, lower backache, nausea, bloating, spotting, darkening of the skin around the nipples, frequent urination, food aversions and cravings.

Most commonly mistaken symptoms of pregnancy with period symptoms

Unfortunately, most of the early pregnancy symptoms are also a signal that indicates your menstrual period is about to start. When you are near to your menstrual cycle, you may experience several pre-menstrual symptoms like bloating, mood swings, and breast tenderness. 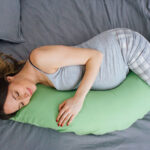