Twin development in the womb will very much mimic the development of a single baby. The conception of twins is caused by one of a few reasons. A twin pregnancy is more likely to happen when there is a history of twins in the family, particularly on the mother’s side. Twin pregnancies are more easily identified in 4 weeks of pregnancy by ultrasound. Twin pregnancies have symptoms that usually change week by week.

Weight gain: Early weight gain of up to ten pounds in 4-8 weeks of pregnancy may result due to increase blood volume and uterine size. By the end of the second trimester, many mothers of twin usually gain 15 to 25 pounds while singleton pregnancies generally gain 10 to 20 pounds.

Nausea: Morning sickness and nausea are even worse with a twin pregnancy. Nausea and vomiting may occur anytime during the day. Extreme nausea is a common experience with twin pregnancies because of the high level of hCG. Most women also experience a heightened sense of smell and may also experience an aversion to specific tastes and smells.

Change in appetite: One of the first signs of pregnancy is a great change in your appetite. Many women experience increased appetite between weeks 4 and 6 as they are carrying twins.

Twin pregnancy symptoms week by week during the second trimester (week 14 to 27):

Breast tenderness: Breast tenderness is a common symptom of early twin pregnancy. Breast muscle soreness and inflammation usually increase in women who are expecting twins.  You can also have darkening of the areola, the circle across the nipple area on the breast.

Heartburn: Many women may experience heartburn and other gastrointestinal discomforts in the twin pregnancy when the growing uterus places pressure on the stomach. A burning sensation in the chest occurs after eating and lasts a few minutes to several hours. It generally comes and goes until your baby is born.

Frequent urination: Increased urination is a common complaint that starts in early pregnancy and continues through the third trimester. Increased supply of blood, hormones, and weight of the uterus make a pregnant woman want to visit the bathroom more frequently.

Twin pregnancy symptoms week by week during the third trimester (weeks 28 to 40):

Joint swelling: Joint swelling is one common symptom that can result from the pressure of the growing uterus on major blood vessels which in turn reduce blood circulation. This can cause swelling in the feet, arms, and ankle.

Puffiness: Your body while carrying twins tends to retain more fluid during the third trimester. Also, the blood vessels enlarge and thus leading to puffy face and eyelids.

Back ache: Many women with twin pregnancy may complain of back pain. In case you are suffering from lower-back pain, it is probably because of your baby’s growth and weight gain, simultaneously pregnancy hormones relax the joints between the bones in your pelvic region which in turn cause pain in the lower back and hips.

Breathlessness: During the third trimester, the increased uterus pushes against the diaphragm that limits the flow of the lungs and can make you feel short of breath. 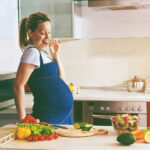