It is relatively common for women who are 8 weeks pregnant and spotting brown blood. But, vaginal bleeding during any stage of pregnancy can indicate a sign of serious condition and it is essential to discuss it with your midwife or GP immediately after you notice.

What causes spotting brown blood during 8 weeks of pregnancy?

Miscarriage: Pregnancy ending prior 24 weeks is usually called as miscarriage. Most women experience it during the first trimester and one in each five confirmed pregnancies ends this way. Hormonal and bleeding problems can lead to miscarriage.

Ectopic pregnancy: It is less common than a miscarriage. Spotting brown blood during 8 weeks can be a sign of ectopic pregnancy, which is the implantation of a fertilized egg outside the womb.

Abnormal cervical changes: During pregnancy, there will be great changes take place in the cells of the cervix, which can cause bleeding particularly after the intercourse. Some kind of vaginal infections can also result in spotting.

Fibroids: These are the abnormal growths in the lining of the uterus, but they are not cancerous. When the placenta embeds where there is a fibroid, it will usually result in brown blood spotting.

Placental abruption: It is a serious condition in which the placenta begins to come away from the womb wall. Usually, this condition can cause stomach pain, and it occurs even if there is no bleeding. This problem may even necessitate the delivery of your baby.

Placenta previa: This is a condition of the low lying placenta. During this condition, the placenta is attached in the lower part of the womb, very near to or covering the cervix.

How to find the cause of bleeding?

To find out what is causing 8 weeks pregnant and spotting brown blood, you should undergo the pelvic or vaginal exam, ultrasound scan or blood test to check the hormone levels. During the examination, your doctor may also ask you regarding various other symptoms such as, pain, dizziness, and cramps. During certain cases, spotting brown blood may not be found.

Implantation Bleeding Happens When and How?

What is the Pathophysiology of Pregnancy? 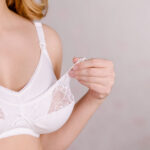 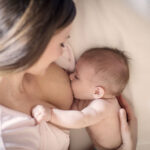