A woman’s body undergoes various changes during the pregnancy period. Various types of rashes develop on the skin. Hormone changes during pregnancy are most often to blame for these conditions. Rash during pregnancy can be itchy and annoying for most women. In some rare cases, these rashes can be potentially life-threatening for the developing baby.

Often there is no cure for any type of rash during pregnancy. They can be treated once after the child birth. There are different types of pregnancy rashes, such as:

PUPPP: It stands for Pruritic Urticarial Papules and Plaques of Pregnancy and one of the most common rashes occur during pregnancy. This affects one in 100 pregnant women and it manifests itself in the form of small elevated papules. This rash during pregnancy can cause severe itching and can even spread on to hands and buttocks, but never appear on the face. Generally, these rashes start appearing after 34 weeks of pregnancy and disappear after the delivery. Applying corticosteroids can give some relief. They are absolutely harmless to the mother and the baby.

Prurigo of pregnancy: This kind of rash during pregnancy is characterized by itchy and reddish spots. Generally, this kind of rash appears on the upper trunks and upper parts of legs and arms, however, appears rarely on buttocks. These rashes start developing on the pregnancy stretch marks. Generally, they start appearing during second trimester or last week of pregnancy. After the delivery, this rash will spread to the entire body but disappears within 2-3 weeks.

Melisma: These are brown colored spots appear on the cheekbones and other areas of the face. Usually, this condition is not a skin rash, but it is due to the hormonal changes and certain medications used during pregnancy. This condition starts at any time of the pregnancy and continues until the child birth. It is not harmful and doesn’t cause itchiness.

Impetigo herpetiformis: It is a rare form of dermatitis during pregnancy. These rashes can be easily identified as they appear in the form of clusters of pus-filled blisters that are arranged in a spiral shape. The blister scabs and disappears after few days, however, accompanied with new blisters at the edges. This type of rash can cause symptoms like fever, chills, hair loss, loose stools, vomiting, and joint pain. These rashes may cause itchiness and burning sensation. They begin on groins, armpits, and the folds of knees and elbows. It usually starts in the last trimester of pregnancy and disappears after the delivery.

Heat rashes: They appear due to excessive heat produced in the body during pregnancy and due to perspiration. Most commonly it appears under the breasts, in the lower abdomen, on the thighs and genital area. Taking a cold bath can help to relieve this condition. 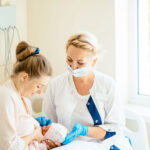